Today we are profiling a club and a stadium that has the rare ability to leave me a drunken, happy and slightly broken mess every single time that I go along and that is 1.FC Union Berlin. For a Groundhopper this stadium should be put at the top of any sort of bucket list that you may have drawn up in a fit of Anorakdom.  I have been along to almost every home game in the year I have been living here and can’t see myself missing many more in the future. Und niemals vergessen…… EISERN UNION, EISERN UNION, EISERN UNION.

I am fearful of writing a history here as this is a club with a rich history mirroring the chequered and divided past of this great city and I don’t think it can be trivialized in a short paragraph.

So, with this, I’ll leave this history to the “experts”.

This stadium oozes history and character and is something that everyone involved with the club is very proud of and rightfully so. Built by the hands of the supporters, it is one of those unique things in modern football, a stadium built for the fans, by the fans and not for the growing armies of prawn bagel eaters that so often attend matches in the higher echelons of the game.

For me, the Stadion An der Alten Försterei in Berlin’s Koepenick district, is one of the most beautiful pieces of stadium architecture that there is, an opinion that is echoed by almost every single person I have been along to a game with. Despite being in the 2nd tier, there are still 3 sides of terracing, one behind the goal containing the loud, ultra block and another large stand covering 1 side of the pitch and the other goal, it is truly one of the most unique grounds that the whole of Europe, let alone Berlin, has to offer. They have recently completed the renovation of a 4th stand and this contains 3018 seats giving the stadium a real full and complete look to it. The whole setting of the stadium is perfect as well and involves a short woodland walk to enter the stadiums grounds. The facilities for making the match day experience enjoyable are also second to none. With “biergarten” style benches dotted around behind both the Sektor 2 and Sektor 3 terracing, it is quite possible to have a full day, in the ground and not feel like you’ve missed out on any of the pre and post match drinking. I could eulogise about the Stadium for a long time and could quite feasibly write a book about the thousands of reasons you need to get along there but I don’t think my ramblings can do it justice. Go along to a game. See it and feel it for yourself. 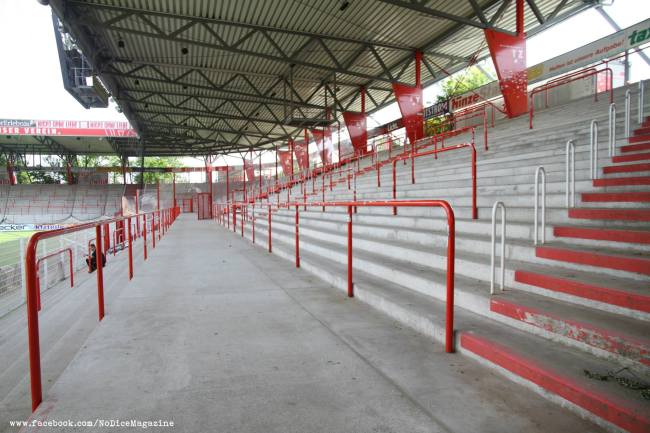 The nearest S-Bahnhof is Koepenick and is reachable using S3 services from Ostkreuz in the direction of Erkner. Then just follow the masses of red and white clad shirts to the Stadium via a quick pint at the Union Tanke and the Abseitsfalle which are on route to the Stadium.

The standard selection of Bratwurst and Steaks are available from Stadium and are highly recommended. These are priced at €2.50 each. Further to this, as one of the bigger clubs in the city, you are more likely to have other options including the formidable cake stall at the back of Sektor 3 which sells Quarkuelchen (little balls of warm donutty wonder) which make a very good companion when the bitter winter sets in.

Pre match, it is advised to stop for a pint in both the Union Tanke and the Abseitsfalle. Pints in both of these are €2.50 with Veltins being sold in the Tanke and Krombacher being sold in the ‘falle. Inside the stadium, the beer facilities are exceptional. Pints are available from multiple outlets in the Stadium including people actually bringing them to you on the terrace. Pints are €3.50 in the stadium and the Beer on offer is Berliner Pilsner.

Sektor 1 – Prices for adult seats vary between €28 and €40 depending on where you sit. Unless you have to, I would not recommend paying for seats as the terracing is a fantastic experience.

Tickets are available for most matches from https://www.themisweb.fr/rodwebshop/fListeManifs.aspx?idstructure=0267

Be sure also to check out www.union-berlin.com for English language ticket news.

Unless it’s the St Pauli game or an “Ostderby” against Dresden or Cottbus, it’s usually very easy to get a ticket. If people need me to help with anything or making sure that you have secured tickets then just let me know.

All fixtures can be found at the link below.